Feeling brave? Sea surface temperatures around Tasmania are taking time to warm up for that first swim of summer this year.

As we head into summer and solar radiation nears its annual maximum, sea surface temperatures around Tasmania are not heating up as much as we might expect and the percentiles indicate they are well below average (as can be seen in Figure 1 from the IMOS OceanCurrent). Over the last few weeks temperatures all around Tasmania have cooled with the strong winds associated with the passage of a number of fronts through the region. This atmospheric cooling appears to be quite widespread but, depending on the weather of course, may not be very long-lasting. An Argo float offshore which profiled on Nov 3 and Nov 13, shows the shallow warm surface layer that had developed by Nov 3 was completely gone 10 days later and the mixed layer depth had deepened to 90m depth.

For waters off the east coast, however, the atmospheric cooling appears to be assisted by a persistent northward shelf current. When a warm core eddy from the East Australian Current comes down past Bass Strait and close to the Tasmanian shelf, it raises the sea level offshore driving southward velocities on the shelf. Conversely the low sea levels associated with a cold core eddy will drive a northward shelf current. The combination of low offshore sea level due to the presence of weak cold-core eddies and persistent northward winds for the last 4 weeks has resulted in quite a strong average alongshore shelf current peaking at 0.5m/s. This northward current appears to have brought cold water from south of Tasmania all along the east coast shelf. Whether the water is an intrusion of cold offshore water onto the shelf or water from the west coast is difficult to tell from the SST but on the east coast the cool water has displaced the warm EAC water that was present on the outer shelf in mid-October. 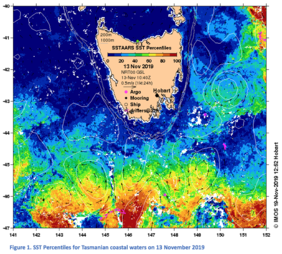 Figure 2: SST anomaly for Oct 16 (left) and Nov 15 (right) showing the cooling of SST around Tasmania, particularly along the east coast.