Highly migratory marine vertebrates were the focus of a workshop at the recent OceanObs19 attended by staff from the IMOS Animal Tracking Facility.

(1) to understand the distribution, movement, behaviour of marine megafauna, and be able to compare across regions and taxa; and

(2) to provide associated environmental data that puts the animal movement information into its oceanographic context and contributes to global ocean observing.

One steering committee, the Global Ocean Observing System- Animal Research and Tracking Initiative will focus on observations collected to support the Essential Ocean Variables/ Essential Biodiversity Variables defined by the GOOS Bio-Eco Panel, and will be chaired by Rob Harcourt.

The second steering committee will focus on supporting the application of oceanographic data collected by marine animals as an emerging network of the Observations Coordination Group of the Joint Technical Commission for Oceanography and Marine Meteorology (JCOMM)/JCOMMOPS and will be chaired by Clive McMahon. This committee is holding a workshop in Hobart November 19-21. 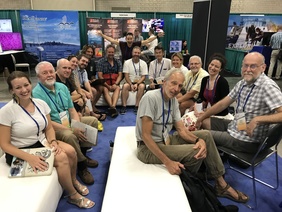