The new IMOS Event-Based Sampling sub-facility was initiated in December 2018 with the goal of monitoring marine heatwaves using ocean gliders.

Marine heatwaves have become more frequent around the globe and Australia is no exception. In the ocean, heatwaves are usually described by their surface expression through satellite SST but the subsurface extent is not so readily discovered. Argo profiles have transformed our knowledge of the deep ocean but, with a 2000m dive program, they are not designed to measure in more shallow regions. Coastal regions, however, are where our coral reefs, kelp forests and sea grasses grow, providing habitat for much of the ocean life, and it is these regions where the marine heatwaves are expected to have the most impact.

The IMOS Event Based Sampling Sub-Facility was initiated in December 2018 with the goal of monitoring marine heatwaves using Slocum gliders. Ocean gliders provide the means to get subsurface measurements where they are most needed. The gliders can be deployed within a week, provide real-time subsurface data, they are remotely operated and can sample the ocean for periods of 3-5 weeks. The coastal IMOS Slocum gliders can dive to 200m measuring temperature, salinity, oxygen concentration, chlorophyll fluorescence, CDOM (coloured dissolved organic matter), backscatter, and irradiance at 4 wavelengths

The region east of Tasmania is one of the global hotspots where ocean temperatures are rising the fastest yet there is limited subsurface data over the continental shelf. A marine heatwave occurred in the Tasman Sea (indicated by a period of persistently high SST percentiles since early January). The sub-facility’s national steering committee met and decided to deploy a glider off eastern Tasmania. The February 2019 deployment demonstrates the interplay between coastal dynamics and the offshore influence of the East Australia Current (EAC). When the February glider (Figure 1, movie) was deployed off St Helens, in the northeast of Tasmania, the first transect indicated relatively cool temperatures consistent with the northward coastal current and the localised upwelling seen in the Four-hour SST on that day and the 13°C water the glider sampled at the bottom on the outer shelf. EAC water was not far offshore, however, and on the return transect the glider finds a sharp front in temperature (and salinity, not shown) as it crosses into the EAC water that had been transported onto the continental shelf.

An additional glider mission in March 2019 (Figure 2) also revealed cold uplifted water at the shelf break all along the northern half of the shelf. The data from these glider missions provides a wealth of information to help develop an understanding of the mechanisms that affect temperatures in the waters off Tasmania’s east coast: surface heat fluxes, regional circulation, the EAC and upwelling. The glider missions are run by the IMOS Ocean Glider Facility and the delayed mode data is available from the AODN THREDDS server (TasEastCoast20190213 and TasEastCoast20190316) or from the AODN Portal (put glider in the keyword search).

This news item was originally published on the IMOS OceanCurrent website as "Marine heatwaves – looking under the surface" and was written by Madeleine Cahill, Jessica Benthuysen and Amandine Schaeffer. 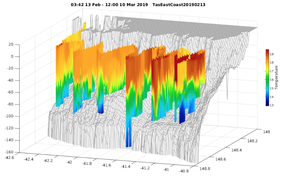 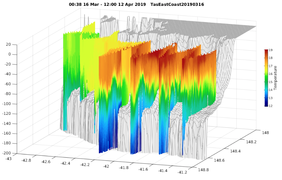