Scientists from The University of Western Australia have discovered Dense Shelf Water Transport around Australia are a unique occurrence globally, where continental scale forcing through air-sea fluxes overcome the local wind and tidal forcing.

These cascades form in winter months and are currently at their peak. They occur when evaporation in summer and subsequent cooling towards winter produce higher density waters closer to the coast that sink to the bottom and flow offshore across the continental shelf, interacting with the ocean currents.

These slow-moving cascades provide an effective mechanism for the transport of water, heat, salt, phytoplankton, nutrients and pollutants from shallow coastal regions into the deep ocean.

The discovery was made using data from IMOS Ocean Gliders, which are operated by the Facility at the University of Western Australia.  The use of ocean gliders as an observational platform enabled the shelf waters to be sampled at high temporal and spatial resolution and also under weather conditions which would have precluded traditional ship-borne measurements.

Dr Tanziha Mahjabin, who undertook this work as part of her PhD Thesis said ‘This work was the result of a huge data set collected using IMOS ocean gliders over more than decade was equivalent to spending more than 2500 days at sea.  This allowed us to examine data from different areas of Australia and also examine the seasonal variability.

Professor Chari Pattiaratchi, from UWA’s Oceans Graduate School and Oceans Institute said usually we use satellites to track surface features such as river plumes but as the dense shelf water transport are below the surface, they were undetected until we started deploying ocean gliders.

“This is the most significant discovery in coastal oceanography in recent decades not only in Australia but also globally,” Professor Pattiaratchi said.

“As heat loss that result in cooling of nearshore water occurs across the whole of the Australian continent, the forcing of coastal seas at a continent scale by a single mechanism (heat loss from the ocean) has never been documented before globally.” As cooling occurs predominantly during autumn and winter months the occurrence of the dense shelf water cascades all happen during this time. Dr Yasha Hetzel, a co-author said.

The coastal ocean is the receiving basin for the input of suspended and dissolved matter that includes nutrients, biota and pollutants and represents an important component of the ocean environment, connecting the terrestrial system to the deeper ocean.

The majority of inputs to the coastal zone are through fresh water sources such as rivers and waste water outflow. As these inputs are usually buoyant, they are transported along the ocean surface and are easily identified in satellite imagery. But in Australia – due to the dense water transport along the sea bed, it is not visible at the surface.  This highlights the importance of this process as a conduit to transport pollutants and biota offshore from the coastal margin. 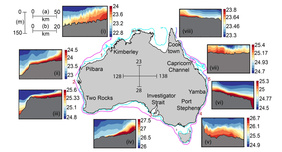