For the first time, the Australian ocean modelling community now have a marine-freshwater discharge dataset to use for modelling and a web-service to ease the process of model verification and data assimilation by providing model-ready observations.

A laborious task in the field of ocean modelling is to obtain datasets to run models, from atmospheric fluxes to initial and time-varying conditions of the ocean. More demanding still is the task to compare in-situ and other observations to the model results. In many projects, the statistical combination of observations and models - data-assimilation - is also an important objective. This technique can be used to create a robust forecast system or a historical analysis of the ocean (a reanalysis).

Based on the previously mentioned hurdles, the DeVL project delivered a brand-new dataset collection, and a web-service focused on the needs of the ocean modelling community. The collection contains a curated list of popular products used as forcing parameters, such as atmospheric fluxes and tidal information, all within a single end-point location. It also includes an entirely new product; the National Coastal Discharge Dataset (NCDD).

The NCDD is a marine-freshwater discharge product covering the entire Australian coastline - the first of its kind to be created and readily available for the community. In-land monitoring stations are used to generate individual estimates within the land-marine fringe through the use of hydrological catchment models. The dataset covers more than twenty years, consists of individually located points at the coastline, is gap-free and accounts for areas without proper observations (ungauged regions).

Also released as part of the DeVL project was a web-service, the first of its kind in the world, that allows ocean modellers to obtain physical observations, quickly perform model validation, and help in data assimilation. The usual processing stream requires a lot of manual steps and is often specific to the type of model or data assimilation technique. This new service automates all of these steps. It can aggregate, average, error-adjust, and co-locate several observations within the individual elements of a numerical model. The result is called a superobservation.

The observations available within the service cover more than twenty-five years of data and with a broad range of observational types. Almost all of the Integrated Marine Observing System (IMOS) physical datasets are included, plus a curated selection from other international institutes. The service is straightforward to use, requiring only the numerical grid file in netCDF format and a valid email. The processing of data can be configured to select particular observational products, specific time-averaging intervals, and even quality control flags. The generation of several superobservations is then performed automatically with the user receiving an email with the complete set of data. Hence, obtaining model-ready observations is easier than ever.

The creation and implementation of these datasets and services are an essential step in supporting the Australian National Shelf Reanalysis1 project - a significant milestone within the research community.

The DeVL forcing datasets are located within the NCI THREDDS server, while the superobservations web-service can be reached at www.devl.aodn.org.au. 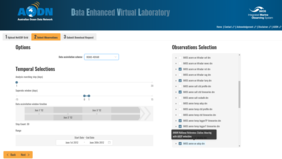 Configuration of the service parameters and Observational product selection. ADCP, Temperature loggers and surface HF-radar were selected for a Western Australia numerical model grid with a simple 1 day window. 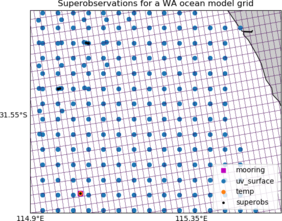 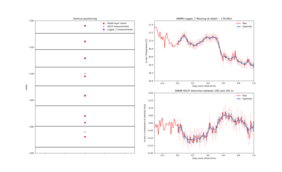 The web-service vertical co-location, aggregation, and error adjustment. The observations are co-located to the correct model vertical layer and within the correct time window (left). The selected time window for both mooring measurements is also correct (right). Reduction in uncertainty is performed by averaging over a prescribed interval. Note the reduced standard deviation (vertical bars) from the raw data (red) to the superobs data (blue) for both Temperature (top-right) and velocities (bottom-right).