A new Australia-wide research framework initiative, the ‘Australian Microbiome’, brings together researchers from more than 40 institutions and government organisations across Australia to advance the understanding of the function of microorganisms in natural Australian environments.

Microbes are the living fabric of our soils, rivers and seas. They play a major role in controlling the function and health of our marine and terrestrial environments. These miniature powerhouses impact our climate by making and breaking greenhouse gases. They are also integral to the prosperity of our agriculture, livestock, fisheries and textile industries; are intimately involved in our health as agents of disease or as potential treatments, they provide clean drinking water, and the means to mitigate waste and pollution.

Despite the key ecological importance of these microorganisms, the environmental drivers supporting their abundance and diversity are still largely undefined.

The ‘Australian Microbiome’ builds on the critical continental resources established by the ‘Biomes of Australian Soil Environments’ (BASE) and ‘Marine Microbes’ initiatives that focussed on soil, ocean and coastal microbiomes.

“The nationally inclusive consortium approach of the BASE and Marine Microbes initiatives, involving over 40 organisations, has been highly successful and facilitated the development of two valuable efforts with impactful deliveries both in terms of data resource and analysis abilities.” said Andrew Gilbert, Bioplatforms Australia’s Chief Executive. “Combining and extending these efforts will create a resource of greater value and impact.”

‘Australian Microbiome’ will enhance existing activities that have built robust protocols and a database housing microbial diversity in both terrestrial and marine environments, associated with rich contextual information on physical and chemical characteristics of the studied sites.

The key partners in this initiative are already utilising positive outcomes from existing efforts. “The Australian Microbiome initiative will strengthen the existing assets and significantly augment the value of previous initiatives to support national research efforts. It will help to define the primary drivers of environmental productivity, while aiding efforts to monitor the health of our environment for more efficient management and drive conservation” stated Dr Sue Fyfe, Director of the Biodiversity Science Section at Parks Australia.

“This project will create a research resource that we simply could not have imagined just a few years ago. By combining field-based sampling, sequencing and bioinformatics we can look for future opportunities for using these techniques to understand Australia’s marine environment, which is vast, valuable, and changing rapidly" added Tim Moltmann, Director of Australia's IMOS.

The initiative uses a time series of microbial data sampled each month and at different depths at the IMOS National Reference Stations. These stations are located at seven sites around Australia’s coastline and positioned to cover different geographic and environmental regions. In addition to marine water sampling and analysis, IMOS is making new investments in DNA extraction and bioinformatics.

The initiative has broad national and international utility for academic researchers, industry and government agencies. The dataset produced through the initiatives is a publicly available national resource for all researchers to use.

“The value of the ‘Australian Microbiome’ initiative ranges from addressing questions around biodiversity discovery, biogeography and evolution, effects of land-use and climate change, and phytoplankton bloom prediction, through to more applied purposes, such as in the areas of biosecurity, mineral prospecting and revegetation success. All of these provide fundamental information for management and monitoring.” said Dr Andrew Young, CSIRO.

Media release for the launch of the Australian Microbiome can be found here: http://www.bioplatforms.com/pr-australian-microbiome-launch/ 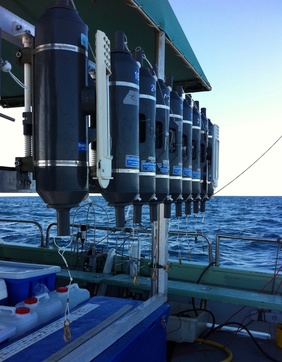