One of the first of its kind in the world, a benchmark database of larval fish collected over the last three decades and analysed by UNSW researchers will help scientists assess the effects of climate change on the health of Australian fisheries.

Published today in Nature’s Scientific Data journal, the database provides the seasonal dynamics of larval fish in temperate and subtropical Australian waters.  Larval fishes are a useful measure of marine ecosystem state and change, as well as species-specific distributions as species shift southward with climate change. The high level of expertise required to identify larval bream from a larval flathead, and the considerable effort required to collect them, make these data extremely valuable.

“The changing abundance of larval fishes due to changing seasons provides a tangible signal of climate change for ecosystem management. This publicly available dataset will be a resource for decades to come” explained lead author, Dr James Smith.

The database is a collaborative effort from many universities, research institutions and government agencies including the Integrated Marine Observing System (IMOS).

The Sydney Institute of Marines Science (SIMS) is the operator of the NSW IMOS program and SIMS CEO, Professor Peter Steinberg said,

“SIMS is delighted to see larval fish researchers using the IMOS infrastructure and becoming part of its national community”.

Larval fish are the delicate early life stage that all fish experience – from sardines to tuna. Larvae are carried in ocean currents before they are large enough to swim, and therefore larvae may be found in new areas due to changing ocean currents.” said Professor Iain Suthers, from University of New South Wales and leader of the National Ichthyoplankton Monitoring and Observing (NIMO) initiative.

UNSW researcher Dr James Smith said that getting historical data into an open database was a great achievement for the initiative.

Historical data that is openly available can serve as a benchmark from which to compare and understand the changes occurring in the marine environment and in particular the marine fish community. For example, one important discovery was the decline in jack mackerel since 2000, but the increase in anchovy, sardine and reef fish like wrasse.

“We’re now in discussion with national providers and funders of fisheries and aquaculture research to determine what next. And the team has already made a major contribution by building a new, open access dataset for use and reuse.”

This work was also supported by the Australian Fisheries Management Authority (AFMA), which provided the impetus to go beyond monitoring and examine these historical datasets. 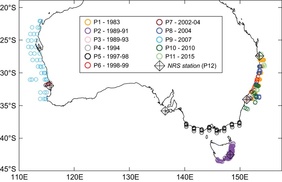 Locations of data for each project (P1-P12) in this data descriptor. The five National Reference Stations (NRS) at which ~monthly sampling of larval fishes is ongoing (the NIMO program) are indicated. Samples at the three NRS on the east coast are currently being sorted and identified, with the remainder stored for future sorting and identification. Figure from Nature Scientific Data. Click to expand.