The third in our three-part series about the New Technology Projects focuses on the Profiling Moorings Evaluation sub-Facility.

In the third of three news items introducing our new sub-Facilities we are looking at:

The Profiling Moorings Evaluation sub-Facility will trial the deployment of two different commercially available profiling mooring platforms (Mclane Prawler and Delmar Wirewalker) for a range of oceanographic environments and applications. The project seeks to determine the operational needs of these profiling systems and assess increases in sampling efficiencies and spatial resolution of data through the water column. The sub-Facility is led by Andrew Martini from CSIRO, in partnership with Craig Steinberg from the Australian Institute of Marine Science (AIMS).

During this assessment phase, the two profiling mooring systems will be co-located in a range of ocean environments to ensure reliability and longevity over long deployment periods.

The first deployment of the two systems was completed in March just south of Myrmidon Reef in Queensland by staff from AIMS and CSIRO. The moorings will remain at the site for two months to allow the systems to be tested in a tropical environment. Fortuitously the deployment captured the end of a marine heatwave that has resulted in the most widespread bleaching observed in the Great Barrier Reef. This tropical site will allow the project to assess how the systems function with higher levels of potential bio-fouling associated with warmer water.

Profiling moorings will provide gains in efficiency as there is a reduction in the number of sensors required in the mooring system as a single multi-sensor package moves up and down powered by surface waves and buoyancy or weight depending on the instrument type. Standard in-line moorings require multiple instruments at fixed points along the wire. The single sensor package used here reduce not only the initial and replacement capital costs for the instrumentation, but also instrumentation servicing, calibration and repair costs. Importantly, more frequent physical and biogeochemical variables can be monitored throughout the water column with the larger suite of sensors on a single instrument.

Expressions of Interest Process underway for a second round of projects

In its second year the IMOS New Technology Proving Facility will prioritise opportunities that can improve efficiency or effectiveness (in either equipment or software/data resources), fill existing gaps (e.g. biological observing), create impact and enhance our outputs. This includes the potential for products or software platforms that increase the uptake, use and applicability of existing IMOS data streams.

The Expressions of Interest process is currently underway with the next round of successful projects starting from the beginning of September 2020. 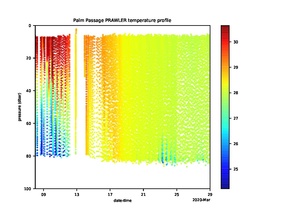 This plot of temperature data is from the Prawler profiling mooring deployed south of Myrmidon Reef. The plot demonstrates the temperature stratification in early March; a hot surface layer of > 30 deg C extended down to 20-30m, with an underlying cold water intrusion of ~25 deg C. By March 13 the wind and waves had increased, cooling the surface and also mixing the warmer water downwards to be ~28.5 deg C. The water column continued to cool through the rest of March. Credit: Pete Jansen, CSIRO. Click to enlarge. 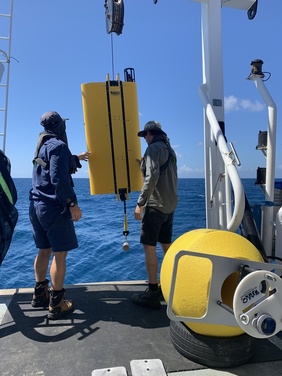 The Wirewalker profiling mooring being deployed off the RV Cape Ferguson by John Luetchford and Chris Bartlett as a part of the commissioning. Credit: Virginie Van Dongen-Vogels, AIMS. 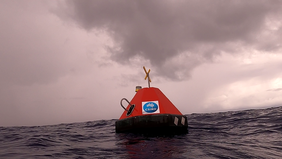 The prawler surface buoy deployed just South of Myrmidon Reef providing data via satellite of the water column properties and the vertical motion to ratchet the prawler up the mooring wire. Credit: Craig Steinberg, AIMS.