Dr Michelle Heupel joins the University of Tasmania in Hobart today, commencing a five-year term as IMOS Director. She is the third person to hold this position, following Tim Moltmann and the late Gary Meyers.

Michelle is a pioneer in the application of acoustic tracking to study shark movement ecology. Her research has examined the long-term residence and movement patterns of sharks and rays in coastal and reef ecosystems to address questions related to how individuals use space in relation to factors such as fishing, marine park zoning and environmental change. Defining underlying mechanisms for movement is a key aspect of this research with an emphasis on providing science for management and conservation of shark and ray populations.

A research scientist with over 20 years’ experience, Michelle completed her undergraduate degree in Zoology at Colorado State University, a PhD at the University of Queensland, and a postdoctoral position at Mote Marine Laboratory in Sarasota, Florida where she established the Elasmobranch Behavioural Ecology Program. Returning to Australia she joined James Cook University (JCU), became Research Director for the AIMS@JCU joint venture, was awarded an ARC Future Fellowship, then joined the Australian Institute of Marine Science (AIMS) as a Research Scientist and Team Leader.

Michelle has produced over 160 peer reviewed scientific publications, and held editorial positions with several scientific journals. She has sat on several national and international committees relevant to science, conservation and management of marine predators and works closely with the Australian Department of the Environment and Energy.

Over several years Michelle has played a key role in the growth and development of biological observing within IMOS using acoustic tracking and related methods. She co-led a Task Team that produced innovative, national-scale research outputs from animal tracking data. This paved the way for a strategic discussion with fisheries and threatened species researchers and managers about how IMOS can increase its relevance and impact on matters of national significance. More recently, Michelle has been a member of the IMOS Science and Technology Advisory Committee (STAC).

“IMOS has a critical role to play in understanding the dynamics and future changes in our marine ecosystems within and beyond Australia,” says incoming IMOS Director, Michelle Heupel. “I look forward to working with national and international research initiatives to enhance IMOS and its applications.”

Tim Moltmann will remain in the IMOS Office for the next two months, working with Michelle during the transition in leadership. 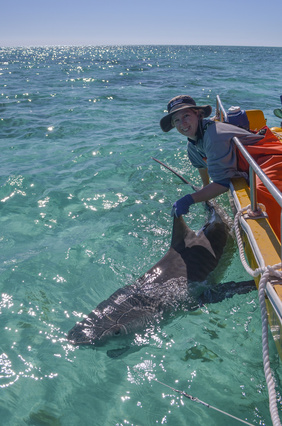