The voyage track can be seen on the IMOS OceanCurrent SST map.

The RV Investigator is on a 30-day research voyage in the south-east Indian Ocean, tracing the path of the previous voyage by the HMAS Diamantina in the 1960's, collecting IMOS data and providing a live lecture for IMAS students.

On 14th May 2019, the RV Investigator departed Fremantle on an oceanographic voyage to the 110°E meridian in the south-east Indian Ocean. This voyage (ship track on IMOS OceanCurrent) is following in the wake of the HMAS Diamantina, which in the 1960s, took Australian scientists to study the physical, chemical and biological oceanography of the same region as part of the first International Indian Ocean Expedition.

During the 2019 voyage, which is Australia’s major contribution to the second International Indian Ocean Expedition (IIOE-2; https://iioe-2.incois.gov.in/), a multi-national team of scientists is repeating many of the measurements made nearly six decades ago to ascertain if there have been significant changes in the pelagic ecosystem near the western extent of Australia’s Exclusive Economic Zone. The voyage is led by Professor Lynnath Beckley of Murdoch University and the research is supported by a grant of sea time on RV Investigator from the CSIRO Marine National Facility.

During the voyage IN2019_V03, in addition to repeating the CTD profiles of temperature and salinity, scientists will carry out a diverse range of water sampling to help measure the foundation of the ocean food chain. The RV Investigator will be towing an IMOS Continuous Plankton Recorder between stations along the 110°E line and, at each station, Claire Davies from CSIRO is deploying a Heron net to sample zooplankton in the surface waters in the same way it is collected at the IMOS reference station network around Australia. Water samples are being taken to determine their microbial constituents as part of the Australian Marine Microbiome Initiative. In addition, water from the Niskin bottles on the CTD rosette is filtered for HPLC analysis of pigments by the team of Prof David Antoine of Curtin University for ground truthing of satellite ocean colour imagery.

The voyage has a single Argo float to be deployed for IMOS and about a dozen weather drifters onboard for regular deployment along the 110°E line for the Bureau of Meteorology and NOAA. Scientists aboard the vessel have already deployed an APEX deep Argo float (6000 m depth capability) for our Japanese colleagues at JAMSTEC and have a further one to deploy later in the voyage. This exciting addition to the voyage came about from discussions during the annual meeting of the IIOE-2 steering committee in March 2019 in Port Elizabeth, South Africa. With some careful logistics, including airfreight from Tokyo to Sydney and a road journey by truck across the Nullabor, the floats reached Fremantle just in time for the start of RV Investigator voyage.

As part of the Oceanographic Methods unit taught at the Institute for Marine & Antarctic Studies IMOS Scientific Officer Ana Lara-Lopez and CSIRO Plankton Biologist Ruth Eriksen organised a live link to the RV Investigator to talk to Professor Lynnath Beckley, deomstrating how plankton data is collected onboard. 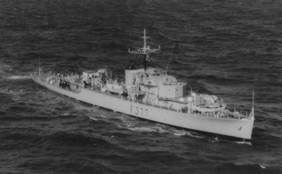 The frigate HMAS Diamantina was the primary vessel used by Australian scientists during the first International Indian Ocean Expedition in the 1960s. Photo courtesy of the Queensland Maritime Museum. 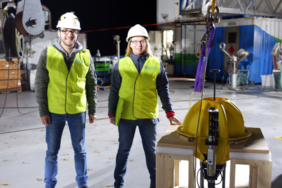 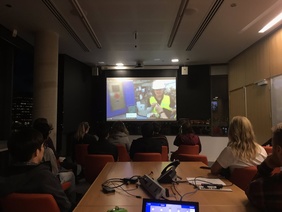