The team from SARDI and Deakin onboard the Rachel Maree preparing to deploy the moorings. Image: Daniel Ierodiaconou

Yesterday a new IMOS mooring was deployed in the water off the Bonney Coast in a collaborative effort between SARDI and Deakin University.

The Bonney Coast encompasses the shelf waters between Cape Jaffa in South Australia and Cape Otway in Victoria, and is the location of a strong seasonal upwelling that supports one of the most productive marine regions in Australian coastal waters. The region is of high ecological and economic importance to South Australia and Victoria.

A deeper understanding of the physical, chemical and biological mechanisms that underpin this highly productive region, and the relevance of this area to threatened, endangered and protected species, and species of commercial interest, will promote the sustainable management of its ecosystems and fisheries.

The coastal mooring deployed yesterday will close a gap in the National backbone of IMOS observations. The mooring was deployed in 100 m of water, and consists of an upward looking Acoustic Doppler Current Profiler (ADCP), conductivity, temperature and depth instrument (CTD), a thermistor string, and SeaPhOx instrument that measures pH, temperature, salinity and oxygen.

Today the team from Deakin will also establish the Portland acoustic gate as part of the Animal Tracking Facility, which will close a gap in the national system on the movement of key species of fisheries interest. 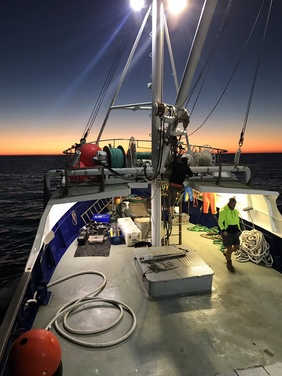