Understanding the ocean processes in this region is important for the shipping, oil and gas, commercial fishing and tourism activities that take place on the North West shelf.

This new IMOS project is funded through a partnership with the Western Australian Government. The project will fund ocean glider deployments every three months, with each deployment lasting between 25-30 days.

The region is one of the most complex oceanographic regions in Australia. It is impacted by the seasonal currents such as the Ningaloo and Holloway Currents. The two currents have different water mass characteristics: the Ningaloo Current transports upwelling derived cold-water northwards driven by direct wind forcing during the summer months; whilst the Holloway Current transports warmer water southwards is dominant between April and September.

Sustained ocean observations of the seasonal and interannual variability of the Ningaloo and Holloway Currents will allow researchers to document the natural variability of the region, and better understand the effect of climate change on this important coastal ecosystem. Providing much needed information for the end users such as fisheries and offshore resource industry in the north west shelf region.

The first ocean glider on this new route was deployed on the 5th of February, and you can track the glider via the real-time data on the AODN Portal, and download charts of temperature, salinity and dissolved oxygen.

The new ocean glider data will be assimilated into ocean models. The University of Western Australia have developed a data assimilation model based on the Regional Ocean Modelling System (ROMS), with the model domain including North West Cape to Torres Strait. This will provide industry with better forecasts of ocean circulation in the region.

The project will also provide the opportunity to train up the next generation of oceanographers, with the glider data being used in postgraduate projects. 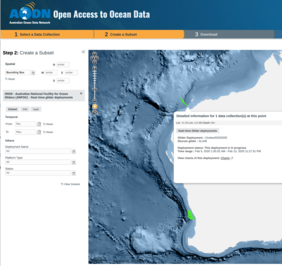 The Onslow Glider track and real-time data on the AODN Portal.

Temperature profile data from the Onslow glider 5-7 February. Download charts such as this from the AODN Portal.