The AODN maintains multiple GeoNetwork metadata catalogues to collate metadata and data holding information for IMOS and the broader Australian marine community.  The metadata catalogues are used for public data asset discovery, with one of the catalogues enabling "faceted searching" and linkages to Web Map Services (WMS) and Download Services, key functionalities of the AODN Portal.

"catalogue-IMOS" is the metadata catalogue that documents all IMOS metadata and data holdings.

The successful transition from the Marine Community Profile (MCP) version 2.0 to the new ISO 19115-3 standard is another significant achievement of this first phase of the project.

To ensure a smooth transition of "catalogue-IMOS" from GeoNetwork 2 to GeoNetwork 3, the AODN Development team meticulously scoped, and planned the project, focusing – over months – on developing the tools and code to form the technical underpinnings of integrating GeoNetwork 3 into the already existing AODN infrastructure.  Associated tasks, included cleansing data, developing a data migration approach and working with the community to determine an agreed mapping of MCP to ISO 19115-3.

A production replica of the metadata catalogue was produced and underwent a multitude of testing, including -

Some AODN contributors have already upgraded to GeoNetwork 3, and others have imminent upgrades pending.  Where required, the AODN team will assist in these upgrades and in the transition of the metadata content from the MCP to the new ISo 19115-3 standard.  The AODN team has ensured that whichever stage contributors are at in the upgrade process, their data will always be kept available. 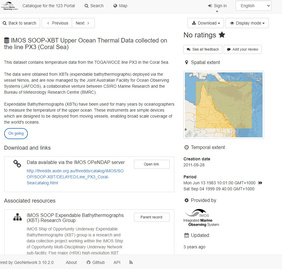